“I do not know how you feel about the Japanese,” wrote a journalist named Elliott Chaze in 1952, “but I do like their feet.” Seven years after World War II, many Americans still regarded the Japanese as enemies — and distrusted anything to do with the country. Yet a rubber version of a Japanese sandal called the zori had become a popular item in U.S. drugstores. “Our women have commenced wearing thonged sandals,” Chaze announced, noting that “obscene picture-books” from Asia eroticized the feet. Japanese women, he believed, revealed themselves in the curl of their toes. And now, thanks to the rubber zoris, American women would too.

Elizabeth Semmelhack, senior curator at the Bata Shoe Museum in Toronto, says that the flip-flop probably originated in the factories of Japan. “The rubber industry was in full swing,” she said, and local designers would have experimented with synthetic zoris. The Hiroshima Rubber Company made the sandals for export in the 1950s — supersizing the zoris to accommodate Westerners’ feet.

“All us well-dressed Lake Tahoe summer residents are wearing thongs this year,” reported the humorist Frank Johnson in 1960, adding, with what now seems shocking racism, that “we pad around in floppy hunks of rubber a sensible coolie wouldn’t wear into a rice paddy.” According to Semmelhack, the term “flip-flop” arose spontaneously in the 1960s, inspired by the slap-slap of rubber as it hit the foot. That year the thongs spread to beaches everywhere and soon Americans began to believe that the rubber thong had been our idea all along. 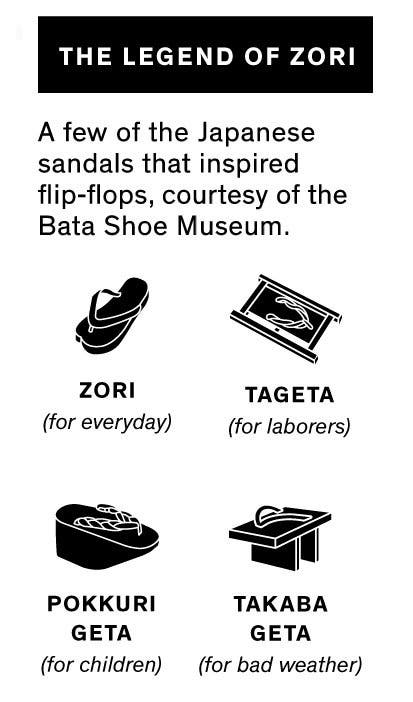 Chris Laverty reports on costume design for his blog clothesonfilm.com.

flipflop was born in japan.tsukumo is the only factory in japan.